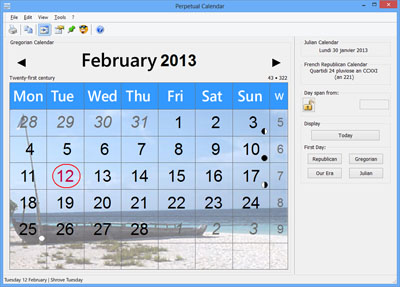 The Perpetual Calendar is a calendar programme for Windows (XP and up), pompously named 'perpetual', because it works from year -3999 to year 3999 of our era.

The main window of the programme is made of two panes. The main part is the monthly calendar, always visible and an expandable right pane shows several information: the corresponding date in the Julian or Republican calendars. Several buttons position the active date : Today (the system date), to the beginning of the French Republican calendar (22nd of September 1792), the Gregorian calendar (default is 15th of  October 1582), our era (first of January,  year 1), or the beginning of the Julian calendar (first of January, year 45 before our era).

The following explanations are limited to the elements used to develop this calendar programme.

The principle of the Julian calendar was adopted by Julius Caesar in the year 45 before our era (year 709 of Rome): It brings in the concept of a year of 365.25 days starting on the first of January. This calendar has lasted in Europe (with some changes in the structure and name of the months) until the Gregorian Reform.

At the beginning, the leap year were counted mistakenly every 3 years. To correct this error, Emperor Augustus decreed, in year 9 before our era (745 AUC), that the 12 years to come will count 365 days. From year 8 of our era, the cycle of leap years followed its normal course again.

You may set year ranges for which years begin on another day than the first of January. For instance England used civil years starting on the 25 December, then the 25 March, before reverting to the 1 January in 1752.

The choice of 3999 as the End Of Time is not related to any apocalyptic prophecy, but comes from the precision of the Gregorian calendar. Somewhere around this year, a correction of one day will be necessary to adjust to the solstice. As no official decision is taken yet, I preferred to play it safe.

Run the CalendarSetup.msi file to launch the Windows Installer process.

A shortcut is added to the Desktop and an entry is added in the Programme Menu.

The Perpetual Calendar is a freeware programme.
You may use it freely, as long as you accept the fact that is is proposed "As Is", without any warranty of any kind.